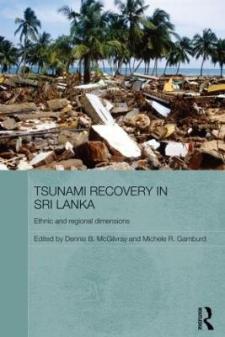 The Indian Ocean Tsunami, which devastated 70 percent of Sri Lanka's coastline and killed an estimated 35,000 people, was remarkable both for the magnitude of the disaster and for the unprecedented scale of the relief and recovery operations mounted by national and international agencies. The reconstruction process was soon hampered by political patronage, by the competing efforts of hundreds of foreign humanitarian organizations, and by the ongoing civil war.

The book is framed within this larger political and social context, offering descriptions and comparisons between two regions (southwest vs. eastern coast) and four ethnic communities (Sinhalese, Tamils, Muslims, and Burghers) to illustrate how disaster relief unfolded in a culturally pluralistic political landscape. Approaching the issue from four disciplinary perspectives - anthropology, demography, political science, and disaster studies - chapters by experts in the field analyse regional and ethnic patterns of post-tsunami reconstruction according to different sectors of Sri Lankan society. Demonstrating the key importance of comprehending the local cultural contexts of disaster recovery processes, the book is a timely and useful contribution to the existing literature.