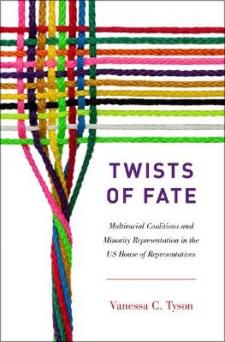 Members of Congress from racial minority groups often find themselves in a unique predicament. For one thing, they tend to represent constituencies that are more economically disadvantaged than those of their white colleagues. Moreover, they themselves experience marginalization during the process of policy formulation on Capitol Hill.

In Twists of Fate, Vanessa C. Tyson illuminates the experiences of racial minority members of the House of Representatives as they endeavor to provide much-needed resources for their districts. In doing so, she devises a framework for understanding the federal legislative behavior of House members representing marginalized communities. She points to the unique ways in which they conceive of political influence as well as the strategies they have adopted for success. Black, Hispanic,
and Asian Pacific American Caucuses, among other minority groups, have built cross-racial coalitions that reflect their linked political fate. This strategy differs considerably from competitive approaches often espoused at the local level and from the more atomized interactions of representatives at the
federal level of the policy process.

Tyson draws on two years of personal experience observing and interacting with members of the House of Representatives in session, in their home districts, at functions sponsored by racial minority caucuses, and at White House events to illustrate her argument. Despite variation of experience and ideology within and amongst racial minority groups, she shows that representatives of minority coalitions have repeatedly and successfully worked together as they advocate for equality and social
justice. She also points to a willingness among these coalitions to champion a non-discrimination agenda that extends beyond "traditional" issues of race and ethnicity to issues of class, gender and orientation. Twists of Fate provides a compelling model for understanding how diverse groups can work
together to forge hopeful political futures.