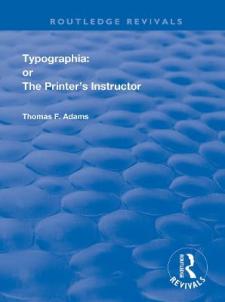 Published in 1981: Authors of early English and American printers's manuals casually appropriated text from their predecessors. The practice, common enough not to require explanation or acknowledgement ( much less apology), was documented by Lawrence C. Wroth in 1935. Citing borrowed passages and devising a literary family tree, Wroth measured the original work of typographical writers from Moxon to De Vinne, with much more praise for them but with less for those in between. The author who, whose Typographia is reprinted here, was found to be the worst and boldest of offenders.