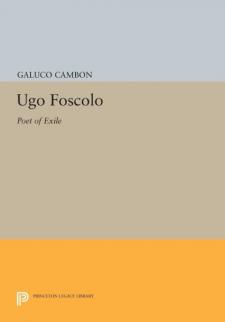 Contemporary with the Romantic generation, peer of Keats, Holderlin, and Goethe, and forerunner of Valéry and Pound, Ugo Foscolo is nevertheless little known outside Italy. In an endeavor to "discover" this exemplary European poet for English-speaking readers, and to "rediscover" him for Italian readers, Glauco Cambon examines both textually and contextually Foscolo's major works and their inextricable connection with his life, his philosophy, and his aesthetic principles. Originally published in 1980. The Princeton Legacy Library uses the latest print-on-demand technology to again make available previously out-of-print books from the distinguished backlist of Princeton University Press. These editions preserve the original texts of these important books while presenting them in durable paperback and hardcover editions. The goal of the Princeton Legacy Library is to vastly increase access to the rich scholarly heritage found in the thousands of books published by Princeton University Press since its founding in 1905.