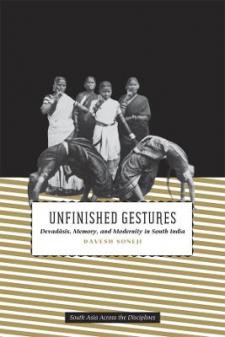 "Unfinished Gestures" presents the social and cultural history of courtesans in South India who are generally called devadasis, focusing on their encounters with colonial modernity in the nineteenth and early twentieth centuries. Following a hundred years of vociferous social reform, including a 1947 law that criminalized their lifestyles, the women in devadasi communities contend with severe social stigma and economic and cultural disenfranchisement. Adroitly combining ethnographic fieldwork with historical research, Davesh Soneji provides a comprehensive portrait of these marginalized women and unsettles received ideas about relations among them, the aesthetic roots of their performances, and the political efficacy of social reform in their communities. Poignantly narrating the history of these women, Soneji argues for the recognition of aesthetics and performance as a key form of subaltern self-presentation and self-consciousness.
Ranging over courtly and private salon performances of music and dance by devadasis in the nineteenth century, the political mobilization of devadasi identity in the twentieth century, and the post-reform lives of women in these communities today, "Unfinished Gestures" charts the historical fissures that lie beneath cultural modernity in South India.