The Universal Right to Education 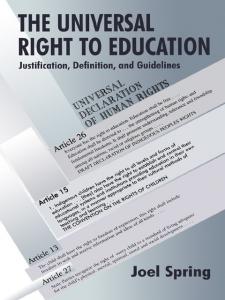 In this book, Joel Spring offers a powerful and closely reasoned justification and definition for the universal right to education--applicable to all cultures--as provided for in Article 26 of the United Nation's Universal Declaration of Human Rights. One sixth of the world's population, nearly 855 million people, are functionally illiterate, and 130 million children in developing countries are without access to basic education. Spring argues that in our crowded global economy, educational deprivation has dire consequences for human welfare. Such deprivation diminishes political power. Education is essential for providing citizens with the tools for resisting totalitarian and repressive governments and economic exploitation. What is to be done? The historically grounded, highly original analysis and proposals Spring sets forth in this book go a long way toward answering this urgent question. Spring first looks at the debates leading up to the Universal Declaration of Human Rights in 1948, to see how the various writers dealt with the issue of cultural differences. These discussions provide a framework for examining the problem of reconciling cultural differences with universal concepts. He next expands on the issue of education and cultural differences by proposing a justification for education that is applicable to indigenous peoples and minority cultures and languages. This justification is then applied to all people within the current global economy. Acknowledging that the right to an education is inseparable from children's rights, he uses the concept of a universal right to education to justify children's rights, and, in turn, applies his definition of children's liberty rights to the concept of education. His synthesis of cultural, language, and children's rights provides the basis for a universal justification and definition for the right to education -- which, in the concluding chapters, Spring uses to propose universal guidelines for human rights education, and instruction in literacy, numeracy, cultural centeredness, and moral economy.