Urban Ecology and Intervention in the 21st Century Americas 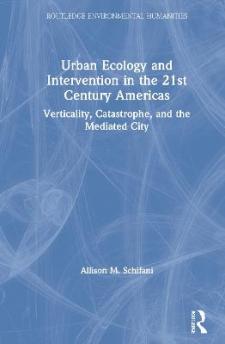 This book takes a hemispheric approach to contemporary urban intervention, examining urban ecologies, communication technologies, and cultural practices in the twenty-first century. It argues that governmental and social regimes of control and forms of political resistance converge in speculation on disaster and that this convergence has formed a vision of urban environments in the Americas in which forms of play and imaginations of catastrophe intersect in the vertical field.

Schifani explores a diverse range of resistant urban interventions, imagining the city as on the verge of or enmeshed in catastrophe. She also presents a model of ecocriticism that addresses aesthetic practices and forms of play in the urban environment. Tracing the historical roots of such tactics as well as mapping their hopes for the future will help the reader to locate the impacts of climate change not only on the physical space of the city, but also on the epistemological and aesthetic strategies that cities can help to engender.

This book will be of great interest to students and scholars of Urban Studies, Media Studies, American Studies, Global Studies, and the broad and interdisciplinary field of Environmental Humanities.