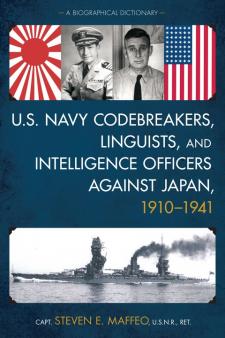 This unique reference presents 59 biographies of people who were key to the sea services being reasonably prepared to fight the Japanese Empire when the Second World War broke out, and whose advanced work proved crucial. These intelligence pioneers invented techniques, procedures, and equipment from scratch, not only allowing the United States to hold its own in the Pacific despite the loss of most of its Fleet at Pearl Harbor, but also laying the foundation of today’s intelligence methods and agencies. One-hundred years ago, in what was clearly an unsophisticated pre-information era, naval intelligence (and foreign intelligence in general) existed in rudimentary forms almost incomprehensible to us today. Founded in 1882, the U.S. Office of Naval Intelligence (ONI)—the modern world’s “oldest continuously operating intelligence agency”—functioned for at least its first forty years with low manning, small budgets, low priority, and no prestige. The navy’s early steps into communications intelligence (COMINT), which included activities such as radio interception, radio traffic analysis, and cryptology, came with the 1916 establishment of the Code and Signals Section within the navy’s Division of Communications and with the 1924 creation of the “Research Desk” as part of the Section. Like ONI, this COMINT organization suffered from low budgets, manning, priority, and prestige. The dictionary focuses on these pioneers, many of whom went on, even after World War II, to important positions in the Navy, the State Department, the Armed Forces Security Agency, the National Security Agency, and the Central Intelligence Agency. It reveals the work and innovations of well and lesser-known individuals who created the foundations of today’s intelligence apparatus and analysis.