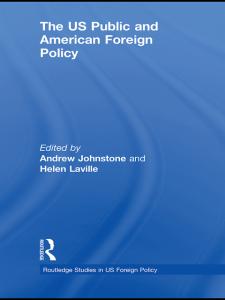 Though often overlooked, public opinion has always played a significant role in the development and promotion of US foreign policy and this work seeks to comprehensively assess the impact and nature of that opinion through a collection of historical and contemporary essays. The volume evaluates the role of organizations and movements that look to represent public opinion, and assesses the nature of their relationship with the government. The contributors utilize a number of different approaches to examine this impact, including polling data, assessments of the role of the media, and the wider consideration of ideas and ideology, moving on to examine the specific role played by the public in the policy making and policy promotion process. Engaging with new questions as well as approaching old questions from a new angle, the work argues that whilst the roles change, and the extent of influence varies, the power of the public to both initiate and constrain foreign policy clearly exists and should not be underestimated. This work will be of great interest to all those with an interest in American foreign policy, American politics and American history.