On the Uses of Military Power in the Nuclear Age 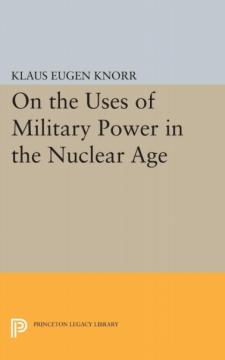 Professor Knorr examines bends in the values which nations derive in their international relationships from the possession and use of both nuclear and non-nuclear military forces, and suggests that territorial conquest and the furtherance of economic benefits by military means have generally diminished in appeal. He inquires into the costs and disadvantages of military power-the greatly reduced security obtainable even by the major nuclear powers and the noticeable diminution in the legitimacy of international violence in its several forms. Originally published in 1966. The Princeton Legacy Library uses the latest print-on-demand technology to again make available previously out-of-print books from the distinguished backlist of Princeton University Press. These editions preserve the original texts of these important books while presenting them in durable paperback and hardcover editions. The goal of the Princeton Legacy Library is to vastly increase access to the rich scholarly heritage found in the thousands of books published by Princeton University Press since its founding in 1905.