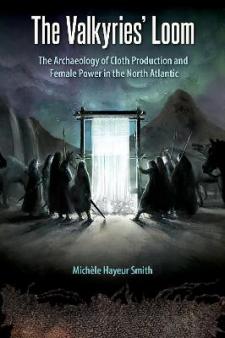 In The Valkyries' Loom, Michele Hayeur Smith examines Viking textiles as evidence for the little-known work of women in the Norse colonies that expanded from Scandinavia across the North Atlantic in the 9th century AD. While previous researchers have overlooked textiles as insignificant artifacts, Hayeur Smith is the first to use them to understand gender and economy in Norse societies of the North Atlantic.

This groundbreaking study is based on the author's systematic comparative analysis of the vast textile collections in Iceland, Greenland, Denmark, Scotland, and the Faroe Islands, materials that are largely unknown even to archaeologists and span 1,000 years. Through these garments and fragments, Hayeur Smith provides new insights into how the women of these island nations influenced international trade by producing cloth (vadmal); how they shaped the development of national identities by creating clothing; and how they helped their communities survive climate change by reengineering clothes during the Little Ice Age. She supplements her analysis by revealing societal attitudes about weaving through the poem "Darradarljod" from Njal's Saga, in which the Valkyries-Odin's female warrior spirits-produce the cloth of history and decide the fates of men and nations.

Bringing Norse women and their labor to the forefront of research, Hayeur Smith establishes the foundation for a gendered archaeology of the North Atlantic that has never been attempted before. This monumental and innovative work contributes to global discussions about the hidden roles of women in past societies in preserving tradition and guiding change.