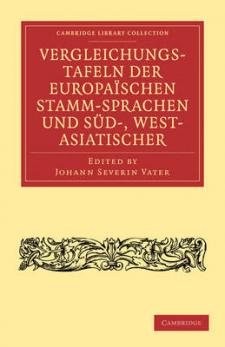 Johann Severin Vater (1771-1826) was professor of theology and Oriental languages at Halle, but his linguistic interests also included Slavonic and Native North American languages. This book, first published in 1822, was a landmark publication of the first generation of Indo-European comparative philology, and was intended as a resource for future comparative study. It includes a substantial contribution by Rasmus Rask, the influential and prolific early Danish linguist, comparing members of the 'Thracian' family of languages, as he called Greek, Latin, Lithuanian, Slavonic and Germanic (including Old Norse), which he had proved to be related. Vater translated this so as to make it available to linguists who could not access the original Danish edition. In addition there are chapters on Albanian, Gaelic, and Georgian (which later research showed to be a Caucasian language), and the book includes numerous comparative tables for easy reference.