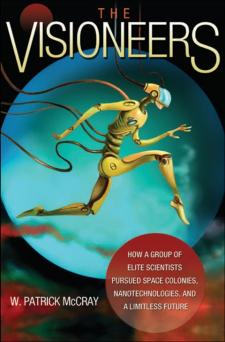 The story of the visionary scientists who invented the futureIn 1969, Princeton physicist Gerard O'Neill began looking outward to space colonies as the new frontier for humanity's expansion. A decade later, Eric Drexler, an MIT-trained engineer, turned his attention to the molecular world as the place where society's future needs could be met using self-replicating nanoscale machines. These modern utopians predicted that their technologies could transform society as humans mastered the ability to create new worlds, undertook atomic-scale engineering, and, if truly successful, overcame their own biological limits. The Visioneers tells the story of how these scientists and the communities they fostered imagined, designed, and popularized speculative technologies such as space colonies and nanotechnologies.Patrick McCray traces how these visioneers blended countercultural ideals with hard science, entrepreneurship, libertarianism, and unbridled optimism about the future. He shows how they built networks that communicated their ideas to writers, politicians, and corporate leaders. But the visioneers were not immune to failure-or to the lures of profit, celebrity, and hype. O'Neill and Drexler faced difficulty funding their work and overcoming colleagues' skepticism, and saw their ideas co-opted and transformed by Timothy Leary, the scriptwriters of Star Trek, and many others. Ultimately, both men struggled to overcome stigma and ostracism as they tried to unshackle their visioneering from pejorative labels like &quote;fringe&quote; and &quote;pseudoscience.?The Visioneers provides a balanced look at the successes and pitfalls they encountered. The book exposes the dangers of promotion-oversimplification, misuse, and misunderstanding-that can plague exploratory science. But above all, it highlights the importance of radical new ideas that inspire us to support cutting-edge research into tomorrow's technologies.