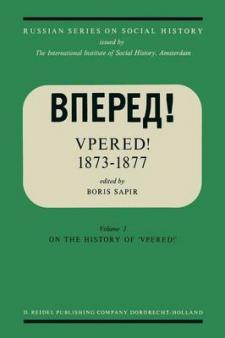 The publication of the following material on the history of Vpered represents the fulfilment of a duty both to the founders of the International Institute of Social History and to Nadezhda Nikolaevna Kolachevskaia and Valerian Valerianovich Kolachevskii, who handed over to the Institute so long ago as 1936 the papers of their late husband and father, Valerian a Nikolaevich Smirnov. ) The Institute undertook at that time to publish these papers, and V. V. Kolachevskii planned to use them in compiling a biography of his father. The Second World War and its consequences imposed changes in these plans. The biography of V. N. Smirnov remained unwritten, and work on the publication of documents from his papers was interrupted for a quarter of a century. First, however, some particulars of these papers. We are here concerned with that section of them which relates to a remarkable literary organ of the Russian revolutionary Populist move ment, the occasional symposia and the fortnightly newspaper, both called Vpered, founded by Petr Lavrovich Lavrov in 1873. Lavrov was the sole editor of the four volumes of occasional symposia (the fourth volume contains only one issue) which were published in Zurich and London between 1873 and 1876, and the 48 issues of the fortnightly newspaper published in London in 1875 and 1876.