The Wandering Civil Servant of Stradivarius 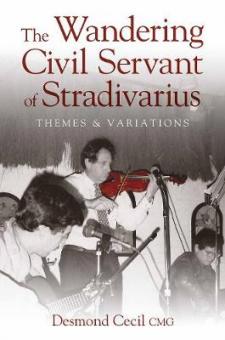 A captivating and heartfelt memoir from a true music aficionado, a senior British diplomat and a nuclear environmental expert in Russia. Hearing Yehudi Menuhin play solo Bach and Bartok in Oxford's Sheldonian Theatre in 1959 would prove an epiphany for the seventeen-year-old Desmond Cecil. Already an advanced oboe student of Joy Boughton, he decided there and then, against all the odds, to become a violinist. This delightful autobiography tells the remarkable journey its author took in his quest to follow his passion to perform music.
He decided, after Chemistry and PPE at Oxford, to move in 1965 to Switzerland for full-time violin study with the illustrious Max Rostal, staying there for five years as a professional violinist. Eventually realising he had started the violin too late to become a top soloist, he returned to the UK to join HM Diplomatic Service in 1970. A fluent linguist, he spent the next twenty-five years serving in embassies abroad and was eventually appointed CMG by HM The Queen. He took early retirement in 1995 to work as an international political/funding adviser for the UK and then the French state nuclear energy industries, with extensive experience of nuclear environmental clean-up in Russia after the dismantling of the Soviet Union.
Along with fascinating insights into his musical, diplomatic and energy callings and sharp anecdotes of some of the important European and British politicians of the past forty years, Cecil also renders tender and charming stories of the many famous musicians he has known and performed with - nowadays on his own authentic Stradivari violin, formally entitled the '1724 Cecil'.