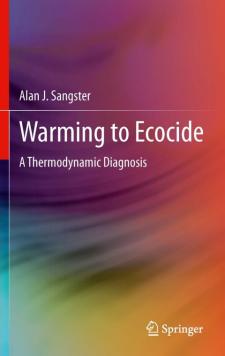 Despite scientific evidence that business-as-usual is unsustainable, there is a huge and widespread inertia to ‘greening’ the planet. Warming to Ecocide considers climate change from a thermodynamic perspective and asks whether market-driven organisations have carried us to the point of no return through the flawed economics of endless growth. Warming to Ecocide begins by exploring the thermodynamic origins of climate change. It demonstrates that equilibrium thermodynamics can provide full explanations for the basic processes of life such as photosynthesis and metabolism, and that non-equilibrium thermodynamics is close to providing an explanation for how life started. Armed with a solid appreciation of the power of thermodynamics, the second half of Warming to Ecocide discusses whether multinational corporations have convinced the public that climate change is insignificant and thereby neutered any all attempts by governments to espouse environmentally-friendly policies. It then goes on to offer strategies whereby mankind may avoid propelling the global average temperature above the pre-industrial level by more than 2°C, which scientists view as a threshold presaging catastrophic run-away processes.