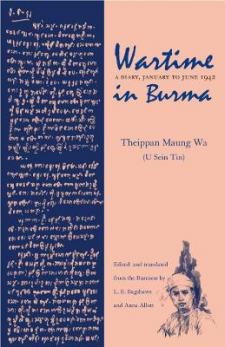 This diary, begun after the Japanese attack on Pearl Harbor and covering the invasion of Burma up to June 1942, is a moving account of the dilemmas faced by the well-loved and prolific Burmese author Theippan Maung Wa (a pseudonym of U Sein Tin) and his family. At the time of the Japanese invasion, U Sein Tin was deputy secretary in the Ministry of Home and Defense Affairs. An Oxford-trained member of the Indian Civil Service, working for the British administration on the eve of the invasion, he lived with his wife and three small children in Rangoon.

Wartime in Burma is a stirring memoir that presents a personal account of U Sein Tin's feelings about the war, his anxiety for the safety of his family, the bombing of Rangoon, and what happened to them during the next six chaotic months of the British retreat. The author and his family leave Rangoon to live in a remote forest in Upper Burma with several other Burmese civil servants, their staff, and valuable possessions-rich pickings for robbers. His diary ends abruptly on June 5, his forty-second birthday; U Sein Tin was murdered on June 6 by a gang of Burmese bandits. The diary pages, scattered on the floor of the house, were rescued by his wife and eventually published in Burma in 1966. What survives is a unique account that shines new light on the military retreat from Burma.