'We Are Going to Pick Potatoes' 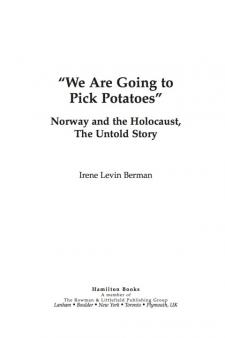 Irene Levin Berman was born, raised, and educated in Norway. Her first conscious recollection of life goes back to 1942, when as a young child she escaped to Sweden, a neutral country during World War II, to avoid annihilation. Germany had invaded Norway and the persecution of two thousand Norwegian Jews had begun. Seven members of her fathers family were among the seven hundred and seventy-one unfortunate persons who were deported and sent to Auschwitz.In 2005, Irene was forced to examine the label of being a Holocaust survivor. Her strong dual identity as a Norwegian and a Jew led her to explore previously unopened doors in her mind. This is not a narrative of the Holocaust alone, but the remembrance of growing up Jewish in Norway during and after WWII. In addition to the richness of both her Norwegian and Jewish cultures, she ultimately acquired yet another identity as an American.