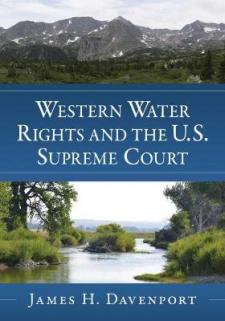 Exploring the little-known history behind the legal doctrine of prior appropriation--"first in time is first in right"--used to apportion water resources in the western United States, this book focuses on the important case of Wyoming v. Colorado(1922). U.S. Supreme Court Associate Justice Willis Van Devanter, a former Chief Justice of Wyoming, ruled in that state's favor, finding that prior appropriation applied across state lines--a controversial opinion influenced by cronyism. The dicta in the case, that the U.S. Government has no interest in state water allocation law, drove the balkanization of interstate water systems and resulted in the Colorado River Interstate Compact between Wyoming, Colorado, Utah, New Mexico, Arizona, Nevada and California.

Mr. Davenport's exhaustive research has uncovered the secret that Associate Justice Van Devanter had waited eleven years to publish his opinion in this important, but politically self-serving, case, at last finding a moment when his senior colleagues were sufficiently absent or incapacitated to either concur or dissent. Without the knowledge of his "brethren," save his "loyal friend" Taft, and without recusal, Van Devanter unilaterally delivered his sole opinion to the Clerk for publication on the last day of the Supreme Court's October 1921 Term.