What Is "Your" Race? 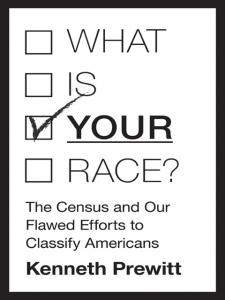 A historical overview of the census race question—and a bold proposal for eliminating it America is preoccupied with race statistics—perhaps more than any other nation. Do these statistics illuminate social reality and produce coherent social policy, or cloud that reality and confuse social policy? Does America still have a color line? Who is on which side? Does it have a different "race" line—the nativity line—separating the native born from the foreign born? You might expect to answer these and similar questions with the government's "statistical races." Not likely, observes Kenneth Prewitt, who shows why the way we count by race is flawed. Prewitt calls for radical change. The nation needs to move beyond a race classification whose origins are in discredited eighteenth-century race-is-biology science, a classification that once defined Japanese and Chinese as separate races, but now combines them as a statistical "Asian race." One that once tried to divide the "white race" into "good whites" and "bad whites," and that today cannot distinguish descendants of Africans brought in chains four hundred years ago from children of Ethiopian parents who eagerly immigrated twenty years ago. Contrary to common sense, the classification says there are only two ethnicities in America—Hispanics and non-Hispanics. But if the old classification is cast aside, is there something better? What Is Your Race? clearly lays out the steps that can take the nation from where it is to where it needs to be. It's not an overnight task—particularly the explosive step of dropping today's race question from the census—but Prewitt argues persuasively that radical change is technically and politically achievable, and morally necessary.