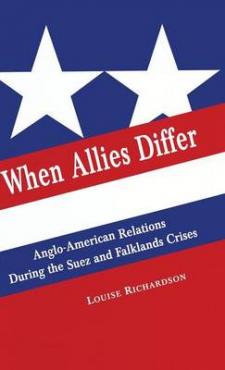 Few topics can be of greater importance to political scientists or practising politicians than international alliances. The political science literature contains many successful studies on the subject of alliances, including those that deal with the idea that an external threat provides cohesion to an alliance while the removal of such a threat causes its disintegration. A strong ally, such as the US, cannot rely on the proponderance of its power to have its views prevail, because the structure of the international system affords options to the weaker ally. When Allies Differ concentrates on the specifics of two cases, the Suez crisis of 1956 and the Falklands war of 1982, in which the interests of two of the closest allies, namely Britain and the US, clashed. In both cases the elements of a peaceful resolution existed. Nevertheless the two countries singularly failed to manage these crises to their mutual advantage. This book explains why. In each case, Britain took military action against a country with which the US was developing ties, and in both cases these ties were jeopardized by the British action. Richardson's analysis of these two cases reveals the importance to policy outcomes of the domestic bureaucratic politics within countries and the effect of those internal politics on global diplomacy. When Allies Differ is a well-reasoned, in-depth study that will be of interest to anyone interested in international relations.