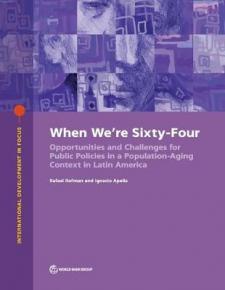 Latin American countries are going through a demographic transition and, consequently, a population aging process. This implies a relative decline in the number of children and an increase in older adults in the next few decades, until the population structure begins to stabilize. Population aging is the result of a slow but sustained reduction in mortality, which implies an increase in life expectancy and fertility. These two trends clearly reflect long-term improvements in welfare and in economic and social development. As such, they should be widely welcomed. However, this process also entails policy challenges: many public institutions--including education, health, and pension systems and labor market regulations--are designed for a different demographic context, and they need to be adapted in order to be effective in the new scenario. Population aging implies two different challenges for public policies. On one hand, older populations demand more fiscal resources for social services such as health, long-term care, and pensions. On the other hand, this process produces shifts in the proportion of the population at working ages, which may affect long-term economic growth.Aging societies risk losing dynamism, being exposed to higher dependency rates, and experiencing lower saving rates. Nonetheless, in the interim, Latin American countries have a demographic opportunity: a temporary decline in dependency rates, opening a period during which the share of the working-age population, with its associated saving capacity, is at its highest levels. This constitutes a great opportunity in the short term, because the higher savings may result in increases in the capital endowment per worker and productivity. For this to happen, it is necessary to generate institutional, financial, and fiscal conditions that promote larger savings and investment, thereby accelerating per capita GDP growth in a sustainable way.