When the World Seemed New 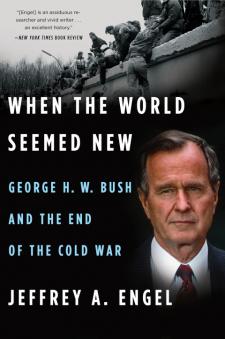 “Engel’s excellent history forms a standing—if unspoken—rebuke to the retrograde nationalism espoused by Donald J. Trump.”—The New York Times Book Review   The collapse of the Soviet Union was the greatest shock to international affairs since World War II. In that perilous moment, Saddam Hussein invaded Kuwait and regimes throughout Eastern Europe and Asia teetered between democratic change and new authoritarian rule. President Bush faced a world in turmoil that might easily have tipped into an epic crisis. As presidential historian Jeffrey Engel reveals in this page-turning history, Bush rose to the occasion brilliantly. Using handwritten letters and direct conversations—some revealed here for the first time—with heads of state throughout Asia and Europe, Bush knew when to push, when to cajole, and when to be patient. Based on previously classified documents, and interviews with all the principals, When the World Seemed New is a riveting, fly-on-the-wall account of a president with his calm hand on the tiller, guiding the nation from a moment of great peril to the pinnacle of global power.   “An absorbing book.”—The Wall Street Journal   “By far the most comprehensive—and compelling—account of these dramatic years thus far.”—The National Interest   “A remarkable book about a remarkable person. Southern Methodist University professor Jeffrey Engel describes in engrossing detail the patient and sophisticated strategy President George H.W. Bush pursued as the Cold War came to an end.”—The Dallas Morning News