Whitman in His Own Time 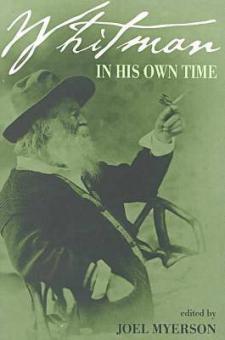 Few American writers were as concerned with their public image as was Walt Whitman. He praised his own work in unsigned reviews; he included engravings or photographs of himself in numerous editions of his work; and he assisted in the writing of two biographies of himself. Whitman was also written about extensively by others throughout his lifetime. Whitman in His Own Time is a collection of these contemporary accounts of the "good gray poet."

The interviews with and recollections of Whitman collected by Joel Myerson represent a wide spectrum of accounts--visitors from America and abroad; newspaper interviewers; Whitman's doctor and nurse during his final illness; his literary executors; a student from his early schoolteaching days; and such well-known authors as Bronson Alcott, John Burroughs, and Henry David Thoreau. The selections also paint a well-rounded picture of Whitman, from his early days as a schoolteacher to the moment of his death, and demonstrate a varying range of attitudes toward the poet. Yet throughout the entire collection, Whitman himself holds center stage, and he is seen as vividly today as he was over one hundred years ago. Myerson's introduction to this expanded edition places these accounts of Whitman within the context of the time and discusses new scholarship on Whitman's life.