Women in Weimar Fashion - Discourses and Displays in German Culture, 1918-1933 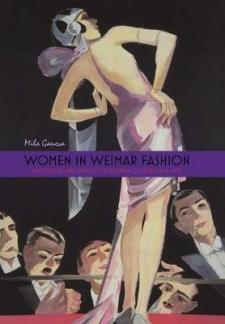 In the Weimar Republic, fashion was not only manipulated by the various mass media -- film, magazines, advertising, photography, and popular literature -- but also emerged as a powerful medium for women's self-expression. Female writers and journalists, including Helen Grund, Irmgard Keun, Vicki Baum, Elsa Maria Bug, and numerous others engaged in a challenging, self-reflective commentary on current styles. By regularly publishing on these topics in the illustrated press and popular literature, they transformed traditional genres and carved out significant public space for themselves. This book re-evaluates paradigmatic concepts of German modernism such as the flaneur, the Feuilleton, and Neue Sachlichkeit in the light of primary material unearthed in archival research: fashion vignettes, essays, short stories, travelogues, novels, films, documentaries, newsreels, and photographs. Unlike other studies of Weimar culture that have ignored the crucial role of fashion, the book proposes a new genealogy of women's modernity by focusing on the discourse and practice of Weimar fashion, in which the women were transformed from objects of male voyeurism into subjects with complex, ambivalent, and constantly shifting experiences of metropolitan modernity.