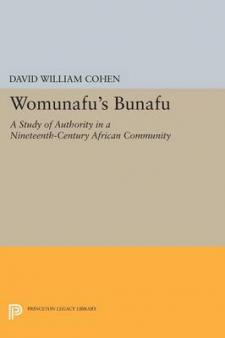 This book reconstructs the career of Womunafu, the son of a ruler of a small state in what is today Uganda. Recognized as an infant to be possessed by Mukama, the spirit of a heroic figure in the tradition of the wider region, Womunafu was placed in a large enclosure, one of four he would occupy from 1830 until his death in 1906. During his long life Womunafu had many wives and children and achieved a position of dominance in the village that came to be known as Bunafu. In considering his life, David William Cohen offers an unusual study of the process through which authority was organized in a pre-colonial African community and advances the study of political institutions and change. His study also explores the nature of evidence regarding African history. By assessing the usefulness of various kinds of oral data and attempting to render the "moving contexts" of the past, the author makes significant methodological contributions to the disciplines of history and anthropology. Originally published in 1978.
The Princeton Legacy Library uses the latest print-on-demand technology to again make available previously out-of-print books from the distinguished backlist of Princeton University Press. These editions preserve the original texts of these important books while presenting them in durable paperback and hardcover editions. The goal of the Princeton Legacy Library is to vastly increase access to the rich scholarly heritage found in the thousands of books published by Princeton University Press since its founding in 1905.