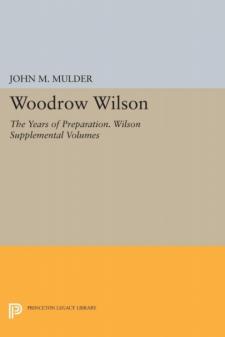 To probe the nature of Woodrow Wilson's intellectual development, this book focuses on the relationship between his religious thought and other areas of his life, from his years as a student and professor through those of his presidency of Princeton University. Professor Mulder draws fully on The Papers of Woodrow Wilson, describing a complex individual and advancing our knowledge of the role of religion in American politics. Originally published in 1978. The Princeton Legacy Library uses the latest print-on-demand technology to again make available previously out-of-print books from the distinguished backlist of Princeton University Press. These editions preserve the original texts of these important books while presenting them in durable paperback and hardcover editions. The goal of the Princeton Legacy Library is to vastly increase access to the rich scholarly heritage found in the thousands of books published by Princeton University Press since its founding in 1905.