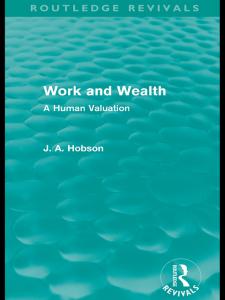 First published in 1914 and reissued with a new introduction in 1992, Work and Wealth is a seminal vision of Hobson's liberal utopian ideals, which desired to demonstrate how economic and social reform could transform existing society into one in which the majority of the population, as opposed to a small elite, could find fulfillment. Hobson attacked conventional economic wisdom which made a division between the cost of production and the utility derived from consumption. Far from being necesarily arduous, Hobson argued that work had the potential to bring about immense utility and enrichment. The qualitative, humanist work argues in favour of a new form of capitalism to minimise cost and maximise utility.