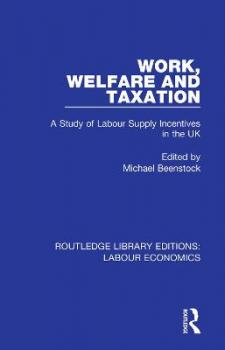 First published in 1987. The reform of the welfare state in the United Kingdom is high on the agenda of all political parties and the proposals for reform, both official and private, are numerous. In this book, Professor Beenstock and his colleagues took a comprehensive account of the social security of the 1980s, as well as the tax system, as it had evolved over the Beveridge era and how it affected our incentive to work.