Worries of the Heart: Widows, Family, and Community in Kenya 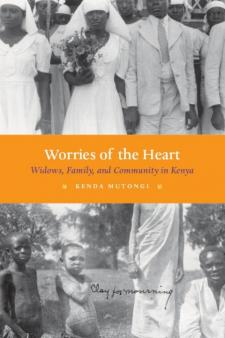 Growing up in the Maragoli community in Kenya, Kenda Mutongi encountered a perplexing contradiction. While the young teachers at her village school railed against colonialism, many of her elders, including her widowed mother, praised their former British masters. In this moving book, Mutongi explores how both the challenges and contradictions of colonial rule and the frustrations and failures of independence shaped the lives of Maragoli widows and their complex relations with each other, their families, and the larger community.            Throughout the twentieth century and into the twenty-first, rates of widowhood have been remarkably high in Kenya. Yet despite their numbers, widows and their families exist at the margins of society, and their lives act as a barometer for the harsh realities of rural Kenya. Mutongi here argues that widows survive by publicly airing their social, economic, and political problems, their &quote;worries of the heart.&quote; Initially aimed at the men in their community, and then their colonial rulers, this strategy changed after independence as widows increasingly invoked the language of citizenship to demand their rights from the new leaders of Kenya-leaders whose failure to meet the needs of ordinary citizens has led to deep disenchantment and altered Kenyans' view of their colonial past. An innovative blend of ethnography and historical research, Worries of the Heart is a poignant narrative rich with insights into postcolonial Africa.