Worse Than a Monolith 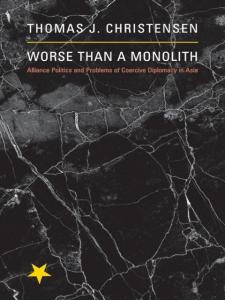 In brute-force struggles for survival, such as the two World Wars, disorganization and divisions within an enemy alliance are to one's own advantage. However, most international security politics involve coercive diplomacy and negotiations short of all-out war. Worse Than a Monolith demonstrates that when states are engaged in coercive diplomacy--combining threats and assurances to influence the behavior of real or potential adversaries--divisions, rivalries, and lack of coordination within the opposing camp often make it more difficult to prevent the onset of conflict, to prevent existing conflicts from escalating, and to negotiate the end to those conflicts promptly. Focusing on relations between the Communist and anti-Communist alliances in Asia during the Cold War, Thomas Christensen explores how internal divisions and lack of cohesion in the two alliances complicated and undercut coercive diplomacy by sending confusing signals about strength, resolve, and intent. In the case of the Communist camp, internal mistrust and rivalries catalyzed the movement's aggressiveness in ways that we would not have expected from a more cohesive movement under Moscow's clear control. Reviewing newly available archival material, Christensen examines the instability in relations across the Asian Cold War divide, and sheds new light on the Korean and Vietnam wars. While recognizing clear differences between the Cold War and post-Cold War environments, he investigates how efforts to adjust burden-sharing roles among the United States and its Asian security partners have complicated U.S.-China security relations since the collapse of the Soviet Union.