Would the World Be Better Without the UN? 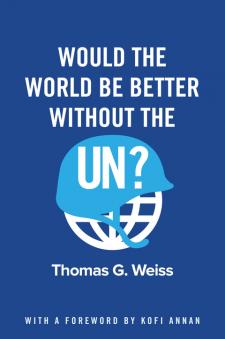 Do we need the United Nations?  Where would the contemporary world be without its largest intergovernmental organization? And where could it be had the UN’s member states and staff performed better?These fundamental questions are explored by the leading analyst of UN history and politics, Thomas G. Weiss, in this hard-hitting, authoritative book. While counterfactuals are often dismissed as academic contrivances, they can serve to focus the mind; and here, Weiss uses them to ably demonstrate the pluses and minuses of multilateral cooperation.  He is not shy about UN achievements and failures drawn from its ideas and operations in its three substantive pillars of activities: international peace and security; human rights and humanitarian action; and sustainable development.  But, he argues, the inward-looking and populist movements in electoral politics worldwide make robust multilateralism more not less compelling.  The selection of António Guterres as the ninth UN secretary-general should rekindle critical thinking about the potential for international cooperation. There is a desperate need to reinvigorate and update rather than jettison the United Nations in responding to threats from climate change to pandemics, from proliferation to terrorism. Weiss tells you why and how.