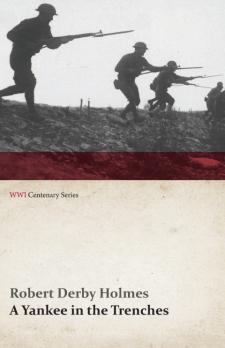 ""I have tried as an American in writing this book to give the public a complete view of the trenches and life on the Western Front as it appeared to me, and also my impression of conditions and men as I found them. It has been a pleasure to write it, and now that I have finished I am genuinely sorry that I cannot go further. On the lecture tour I find that people ask me questions, and I have tried in this book to give in detail many things about the quieter side of war that to an audience would seem too tame. I feel that the public want to know how the soldiers live when not in the trenches, for all the time out there is not spent in killing and carnage. As in the case of all men in the trenches, I heard things and stories that especially impressed me, so I have written them as hearsay, not taking to myself credit as their originator. I trust that the reader will find as much joy in the cockney character as I did and which I have tried to show the public; let me say now that no finer body of men than those Bermondsey boys of my battalion could be found.""
R. Derby Holmes, Corporal of the 22d London Battalion of the Queen's Royal West Surrey Regiment
This book is part of the World War One Centenary series; creating, collating and reprinting new and old works of poetry, fiction, autobiography and analysis. The series forms a commemorative tribute to mark the passing of one of the world's bloodiest wars, offering new perspectives on this tragic yet fascinating period of human history. Each publication also includes brand new introductory essays and a timeline to help the reader place the work in its historical context.