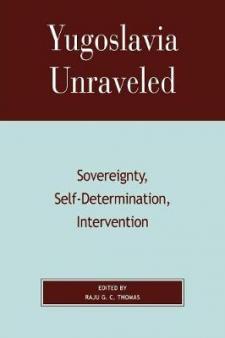 Unlike many of the works on the Yugoslav wars written during and just after the crisis, Yugoslavia Unraveled delves beyond 'who did what to whom' to examine underlying issues regarding the sources of religious nationalism and inter-ethnic conflict, the territorial integrity and sovereignty of states, and the principle of self-determination and the right of secession from an existing state. This volume raises essential questions pertaining to the legality and morality of military intervention by external powers without U.N. sanction, and to nation-building by outside powers in war-devastated territories. The book also explores the nature of media propaganda in times of war. Editor Raju G. C. Thomas and the prominent contributors provide fresh views and alternative explanations for the unraveling of a sovereign independent state following the end of the Cold War and in a world without countervailing power.