Zen and Confucius in the Art of Swordsmanship 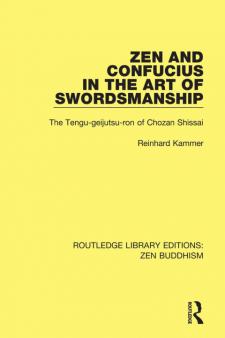 The sword has played an important role in the Japanese consciousness since ancient times. The earliest swords, made of bronze or stone, were clearly, by their design and form, used for ritualistic purposes rather than as weapons. Later, swords were associated only with the warrior class, and lack of physical strength and battle experience was compensated for by handling the sword in a way that was technically expert. Besides this sacred and artistic status, swordsmanship also acquired a philosophical reinforcement, which ultimately made it one of the Zen ‘ways’. Zen Buddhism related the correct practice of swordsmanship to exercises for attaining enlightenment and selfishness, while Confucianism, emphasizing the ethical meaning, equated it to service to the state. This classic text, first published in English in 1978, includes a history of the development and an interpretation of Japanese swordsmanship, now esteemed as an art and honoured as a national heritage. It describes in detail the long, intensive and specialized training and etiquette involved, emphasizing and explaining the importance of both Zen and Confucian ideas and beliefs.