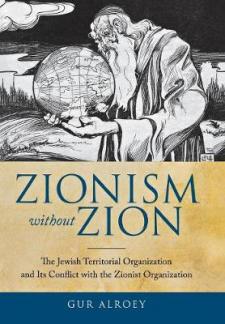 While the ideologies of Territorialism and Zionism originated at the same time, the Territorialists foresaw a dire fate for Eastern European Jews, arguing that they could not wait for the Zionist Organization to establish a Jewish state in Palestine. This pessimistic worldview led Territorialists to favor a solution for the Jewish state ""here and now""-and not only in the Land of Israel. In Zionism without Zion: The Jewish Territorial Organization and Its Conflict with the Zionist Organization, author Gur Alroey examines this group's unique perspective, its struggle with the Zionist movement, its Zionist rivals' response, and its diplomatic efforts to obtain a territory for the Jewish people in the first decades of the twentieth century.

Alroey begins by examining the British government's Uganda Plan and the ensuing crisis it caused in the Zionist movement and Jewish society. He details the founding of the Jewish Territorial Organization (ITO) in 1903 and explains the varied reactions that the Territorialist ideology received from Zionists and settlers in Palestine. Alroey also details the diplomatic efforts of Territorialists during their desperate search for a suitable territory, which ultimately never bore fruit. Finally, he attempts to understand the reasons for the ITO's dissolution after the Balfour Declaration, explores the revival of Territorialismwith the New Territorialists in the 1930s and 1940s, and describes the similarities and differences between the movement then and its earlier version.

Zionism without Zion sheds new light on the solutions Territorialism proposed to alleviate the hardship of Eastern European Jews at the start of the twentieth century and offers fresh insights into the challenges faced by Zionism in the same era. The thorough discussion of this under-studied ideology will be of considerable interested to scholars of Eastern European history, Jewish history, and Israel studies.