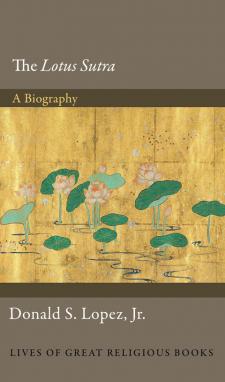 A concise and accessible introduction to the classic Buddhist textThe Lotus Sutra is arguably the most famous of all Buddhist scriptures. Composed in India in the first centuries of the Common Era, it is renowned for its inspiring message that all beings are destined for supreme enlightenment. Here, Donald Lopez provides an engaging and accessible biography of this enduring classic.Lopez traces the many roles the Lotus Sutra has played in its travels through Asia, Europe, and across the seas to America. The story begins in India, where it was one of the early Mahayana sutras, which sought to redefine the Buddhist path. In the centuries that followed, the text would have a profound influence in China and Japan, and would go on to play a central role in the European discovery of Buddhism. It was the first Buddhist sutra to be translated from Sanskrit into a Western language-into French in 1844 by the eminent scholar Eugene Burnouf. That same year, portions of the Lotus Sutra appeared in English in The Dial, the journal of New England's Transcendentalists. Lopez provides a balanced account of the many controversies surrounding the text and its teachings, and describes how the book has helped to shape the popular image of the Buddha today. He explores how it was read by major literary figures such as Henry David Thoreau and Gustave Flaubert, and how it was used to justify self-immolation in China and political extremism in Japan.Concise and authoritative, this is the essential introduction to the life and afterlife of a timeless masterpiece.