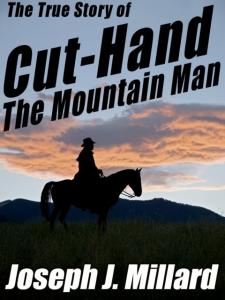 The true story of Richens Lacy "Cut-Hand" Wootton, mountain man, pioneer, explorer, and trader who helped open the American West. Dick Wootton was "two hundred pounds of hard muscle with a wild shock of bristling hair to match" when in 1836 he set out from Kentucky for the far west. He lived to become one of the greatest of all those who helped tame a savage and unknown land.

In childhood when playing with an axe, Dick lost two fingers and was always called "Cut-Hand" by the Native Americans. They knew him as a white man whose word to them was never broken. As a trapper, explorer, buffalo hunter, Indian fighter, and scout, he lived enough adventures for a dozen ordinary men. But he went on to drive a flock of 9,000 sheep over 1,600 miles of desert and mountains to the California gold fields, outwitting Native Americans and bandits on the way, and made a fortune from the venture. With the Colorado gold strike, Dick opened the first store and hotel in Denver, then founded the town of Pueblo. His last great exploit was to blast open the 50-mile Raton Pass between New Mexico and Colorado to establish the first toll road in the west. He lived there until his death in 1893, watching a growing nation surge westward over the trails he had carved out from the wilderness.