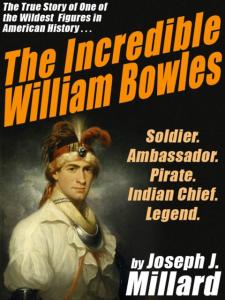 William Augustus Bowles -- a British Loyalist during, and for a quarter century after, the American Revolutionary War. Part soldier, part dreamer, and part adventurer, he went from service in the British Army to joining the Muskogee Peoples, rising to be a respected war chief among the Native Americans. He waged war on the Spanish and fought to create a Native American state.

His story embodies the idea of the individual hero: Bowles is resourceful, far-seeing, and selfless, always fighting not only personal enemies, but national enemies of both Great Britain and his adopted country -- The United Nation of the Creeks and the Cherokees.

Joseph J. Millard has painstakingly researched the life and career of William Bowles, painting a picture of a man driven by his beliefs. Soldier -- Ambassador -- Pirate -- Indian Chief -- A man chosen by Destiny to become one of the greatest American Legends!