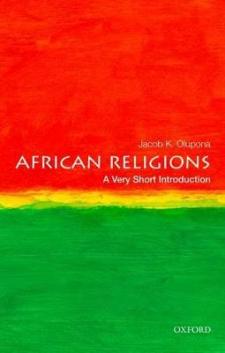 Africa is home to hundreds of ethnic groups, who together speak more than a thousand languages. It is not surprising, then, that Africa's enormous range of peoples, cultures, and ways of life has engendered a wide diversity of religious practices.

This Very Short Introduction offers a wide-ranging look at the myriad indigenous religious traditions on the African continent. Drawing on archeological research, historical evidence, ethnographic studies, and archival materials such as missionary records, Jacob Olupona-one of the world's leading authorities on African religions-captures a wealth of information in a short compass. The book not only gives the reader a full and vivid sense of African religious belief-exploring myths,
gods and local deities, ancestor worship, rites of passage, festivals, divination, and much more-but it also underscores the role these religions play in everyday African life. Indeed, traditional religions inform everything from birthing and death, marriage and family dynamics, to diet, dress and grooming,
health care, and even governance. Monarchs, chiefs, and elders play both political and religious roles, imparting secular and spiritual guidance to their subjects, while also being guardians of religious centres such as shrines, temples, and sacred forests. The author also examines the spread of Christianity and Islam throughout Africa, both the moderate sects (which often blend aspects of indigenous faith into their own practice) and the more extreme fundamentalist sects, which the author
states have had a dire effect on African life. In fact, radical forms of Christianity and Islam-both of which decry tradition religion as paganism-have driven a near total collapse of indigenous practice. But if traditional religions are engaged in a battle for their lives in Africa, Olupona shows
that they are thriving elsewhere in the world-particularly in the Americas and in Europe.

Oxford's Very Short Introductions series offers concise and original introductions to a wide range of subjects-from Islam to Sociology, Politics to Classics, Literary Theory to History, and Archaeology to the Bible. Not simply a textbook of definitions, each volume in this series provides trenchant and provocative-yet always balanced and complete-discussions of the central issues in a given discipline or field. Every Very Short Introduction gives a readable evolution of the
subject in question, demonstrating how the subject has developed and how it has influenced society. Eventually, the series will encompass every major academic discipline, offering all students an accessible and abundant reference library. Whatever the area of study that one deems important or appealing, whatever the
topic that fascinates the general reader, the Very Short Introductions series has a handy and affordable guide that will likely prove indispensable.