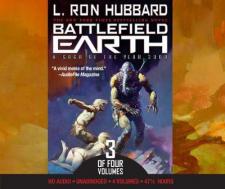 New York Times Bestseller. Decimated by aliens with superior technology . . . a young hero and a handful of Scottish rebels must risk everything. Is it the end of the world? Or the dawn of a new one? Part 3: Not knowing if the attack on the planet Psychlo was successful, Jonnie and the Scottish rebels prepare for the counter-attack. Meanwhile, Terl, the evil Psychlo, builds a bomb that will destroy what remains of humanity. With numerous otherworld alien ships now appearing over the defenseless planet, Jonnie and his men realise that the fight with Psychlo was just the beginning . . . The fate of the Galaxy lies on the Battlefield of Earth. This is one of the finest examples of science fiction ever written, with nuance, sub-plots, and action all the way through. You'll love this epic New York Times bestseller by L. Ron Hubbard, because his vision of science fiction was ahead of its time. Experience the unabridged audiobook in fully immersive HD sound of the story that changed the shape of science fiction forever. Performed by over 65 actors playing 198 characters with 150,000 sound effects. Get it now.