The Career of Katherine Bush - The Original Classic Edition 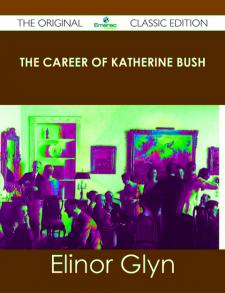 Finally available, a high quality book of the original classic edition of The Career of Katherine Bush. It was previously published by other bona fide publishers, and is now, after many years, back in print.

This is a new and freshly published edition of this culturally important work by Elinor Glyn, which is now, at last, again available to you.

Get the PDF and EPUB NOW as well. Included in your purchase you have The Career of Katherine Bush in EPUB AND PDF format to read on any tablet, eReader, desktop, laptop or smartphone simultaneous - Get it NOW.

Enjoy this classic work today. These selected paragraphs distill the contents and give you a quick look inside The Career of Katherine Bush:

I always did say that you would pick up rubbishly ideas bothering after those evening lectures and French classes—instead of coming with Glad and Bert and me to the cinema, like a decent Christian—it was a low sort of thing to do, I think, and looked as if we'd none of us had a proper education—and all they have done for you is to unsettle your mind, my dear—so I tell you.'

...'Probably—the thing I mean does not lie in moral qualities—I suppose it ought to—but it doesn't—We had a real sharp last week, and to look at and to hear him talk he was a perfect gentleman, with refined and easy manners; he would never have done anything in bad taste like Fred and Bert often do.'

About Elinor Glyn, the Author: