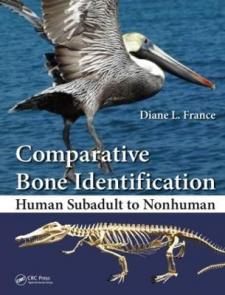 Building on the success, and maintaining the format, of the best-selling Human and Nonhuman Bone Identification: A Color Atlas (ISBN: 978-1-4200-6286-1), Comparative Bone Identification: Human Subadult to Nonhuman presents new images of human bones representing many states of maturation from neonate to 20 years old. It also extends the scope of the former work by focusing on the smaller bones of fetuses and young humans and comparing them to bones of birds, reptiles, marine mammals, fish, and a frog that may be confused with those of a subadult human.

The book begins with a section on general osteology and explains the major anatomical differences between humans and other animals. The second section compares human and nonhuman bones, categorized by type of bone, and includes most of the major bones in humans and nonhumans. The third section presents skeletons within species.

Containing nearly 3,500 color photographs, the book provides examples of similar bones in nonhuman species that may be confused with the human bone in question. The bone images are also taken from different angles to enhance detailed understanding.

A practical comparative guide to the differences among species for nearly all bones in the body, this book is a valuable resource for the laboratory or in the field. It uses a visual approach with annotations pointing out salient features of the most commonly discovered bones, giving clear examples for use by law enforcement, medicolegal death investigators, forensic anthropologists, students, and readers who wish to distinguish between human bones and those of the a variety of animal species.