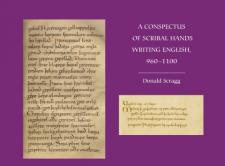 Comprehensive, annotated list of over a thousand Anglo-Saxon scribal hands, linking them to place and manuscript.During the final century of the Anglo-Saxon state, the use of written English reached remarkable heights. Yet, while the make-up and contents of the many books and documents surviving from the period have been fully catalogued, less attention has been devoted to those who produced them. This is the first comprehensive annotated list of the scribal hands whose work survives from the time of the Benedictine Reform under King Edgar to that of the generation succeeding the Norman Conquest. More than a thousand hands are listed, together with details of their work, which ranges from a few words or sentences in marginalia to multiple volumes. The result is a reference tool which will allow further research not only into palaeographical issues but also into the writing habits and grammar of individuals and groups of related scribes and into patterns of education in some of the larger cultural centres. Donald Scragg is Professor Emeritus of Anglo-Saxon Studies at the University of Manchester.