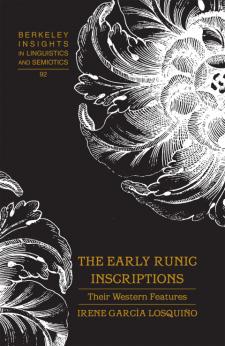 Why were runes invented? What did the Germanic peoples of southern Scandinavia speak during the first centuries CE? Can the earliest runic inscriptions be used to learn something about their dialects, and can we extract other information from their study as a corpus? The Early Runic Inscriptions: Their Western Features gives answers to these questions through an analysis of the earliest runic inscriptions found mainly in Denmark, and later in England and on the continent up to the seventh century. This analysis offers a novel tracing of the initial appearance and later establishment of West Germanic dialectal features in an area and time usually referred to as having a more Northern linguistic identity.
The earliest runic inscriptions are an invaluable source of information about the state of the Germanic dialects during the first seven centuries of our era. They also provide insights about some of the social customs of different Germanic groups during this period, such as the development of the purposes of runic writing or personal-name formation. Using a comparative and comprehensive methodology, this book combines linguistics with other disciplines to cast as much light as possible on these oftentimes single-worded inscriptions.