Everyday State and Politics in India 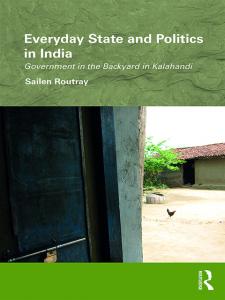 The Kalahandi district in the state of Odisha in Eastern India is regarded as an iconic region of underdevelopment, and is often perceived to be the ‘Somalia’ of the country. It is also the site of a large number of governmental interventions. This book focuses on processes of governance in Odisha, and provides an ethnographic account of the changing forms of governmental actions in Kalahandi by analysing the implementation of WORLP (Western Orissa Rural Livelihoods Project), a new generation watershed development project. The book also shows the morphings of the forms of the state on the ground, and the ways in which it is perceived by the agents and objects of statist actions. Arguing that changes in the institutions and practices of the state in India over the last three decades are better understood through the conceptualisation of state-fabrication, rather than of state-formation, the author describes the governmental tactics related to emergent modes of governmental action. The book identifies an increasing convergence in the everyday practices of governmental and non-governmental organisations, and the growth of ‘the social’ as a terrain and object of governmental actions, as two important effects of the process of deployment of these tactics. It argues that the vernacular sphere of toutary is a key domain of sociality that frames the perceptions and actions of people related to the state in Odisha. As a domain, toutary is populated by social agents, called touters; toutary can be understood as the interstitial zone between state and society shaped by the increasing penetration by the state into society through social technologies. By providing an alternative analysis of state and politics in India, this book adds to the literature surrounding the everyday state by illuminating recent changes in state-society relations. It will be of interest to academics in the field of Political Science, Public Policy, Development Studies, Social Anthropology/Sociology, Social Work, and South Asian studies.