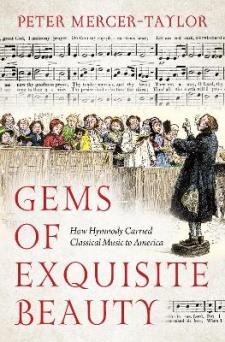 In the decades leading up to the Civil War, most Americans probably encountered European classical music primarily through hymn tunes. Hymnody was the most popular and commercially successful genre of the antebellum period in the United States, and the unquenchable thirst for new tunes to sing led to a phenomenon largely forgotten today: in their search for fresh material, editors lifted hundreds of tunes from the works of major classical composers to use as settings
of psalms and hymns. The few that remain popular today - millions have sung "Joyful, Joyful We Adore Thee" to Beethoven and "Hark, The Herald Angels Sing" to Mendelssohn - are vestiges of one of the most distinctive trends in antebellum music-making.

Gems of Exquisite Beauty is the first in-depth study of the historical rise and fall of this adaptation practice, its artistic achievements, and its place in nineteenth-century American musical life. It traces the contributions of pioneering figures like Arthur Clifton and the impact of bestsellers like the Handel and Haydn Society Collection, which helped turn Lowell Mason into America's most influential musician. By telling the tales of these hymns and those who brought them
into the world, author Peter Mercer-Taylor reveals a central part of the history of how the American public first came to meet and creatively engage with Europe's rich musical practices.