On the Geological Structure of the Alps, Apennines and Carpathians 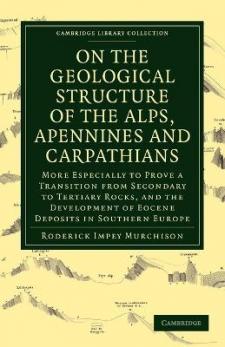 Few men were better placed to produce an authoritative study of Continental geology than Roderick Impey Murchison (1792-1871), President of the Geological Society and the Royal Geographical Society of London. Having conducted extensive fieldwork alongside Adam Sedgwick, in 1847 Murchison set out on a study tour that would change the manner in which geology was understood and debated. Delivered before the Geological Society and published in their Quarterly Journal in 1849, this paper challenged received wisdom as to the age and formation of the most impressive of geological phenomena. Covering crystalline and palaeozoic rocks, the Trias, iron mines, nummulitic rocks and fish slates, this landmark study and its numerous diagrams that illustrate it not only explain a geological subject, but also reveal the nature of nineteenth-century scientific scholarship. The book also contains a short supplementary paper on the distribution of surface detritus in the Alps.