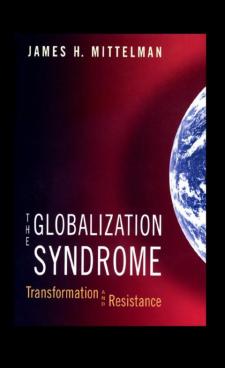 Here James Mittelman explains the systemic dynamics and myriad consequences of globalization, focusing on the interplay between globalizing market forces, in some instances guided by the state, and the needs of society. Mittelman finds that globalization is hardly a unified phenomenon but rather a syndrome of processes and activities: a set of ideas and a policy framework. More specifically, globalization is propelled by a changing division of labor and power, manifested in a new regionalism, and challenged by fledgling resistance movements. The author argues that a more complete understanding of globalization requires an appreciation of its cultural dimensions. From this perspective, he considers the voices of those affected by this trend, including those who resist it and particularly those who are hurt by it. The Globalization Syndrome is among the first books to present a holistic and multilevel analysis of globalization, connecting the economic to the political and cultural, joining agents and multiple structures, and interrelating different local, regional, and global arenas. Mittelman's findings are drawn mainly from the non-Western worlds. He provides a cross-regional analysis of Eastern Asia, an epicenter of globalization, and Southern Africa, a key node in the most marginalized continent. The evidence shows that while offering many benefits to some, globalization has become an uneasy correlation of deep tensions, giving rise to a range of alternative scenarios.