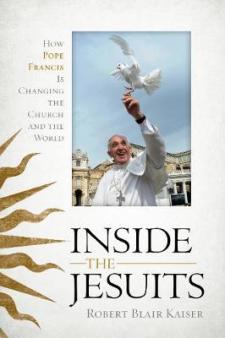 Pope Francis, the first Jesuit pope, has captured our attention by stepping away from the papal throne, unafraid to give impromptu interviews, decentralize church governance, or explore new horizons for the greater good of the people of God. His actions and words suggest that he is here not to dominate but to serve, less inclined to preach than to listen, and to bring us back to Jesus "that we may have life and have it more abundantly." Award-winning journalist Robert Blair Kaiser argues that the pope's Jesuit DNA is central to understanding how Pope Francis is shaping the church and the world.

Inside the Jesuits takes readers inside the Jesuits' head-and-heart take on faith. The author tells the story of his own Jesuit training before leaving to become a journalist and highlights how the key elements of the Jesuit formation have made Pope Francis the pope he is-like Jesus in his simplicity, launching bold administrative moves to update the Church, and daring to say and do things no other pope has said or done. He washes the feet of those in prison, including a Muslim woman. He says of homosexuals, "Who am I to judge?" To further illustrate the Jesuit DNA in action, Kaiser produces some fascinating profiles of other Jesuits and former Jesuits working the Jesuit motto, "for the greater glory of God"-which Kaiser gives a more worldly spin: "for the greater good of the people of God."

Inside the Jesuits is a powerful exploration of how the Jesuit training-to be more like Jesus-has shaped Pope Francis, a self-confessed sinner who encourages us to love our supposedly-less-worthy selves and help make a better world.